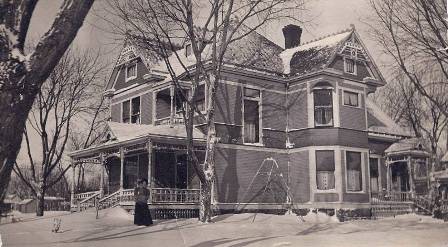 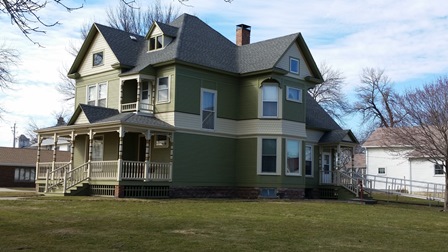 The lots, know as numbers 11 and 12 of Block 3 of the Original Town of Hartley plat, were part of the NE 1/4 of Section 32 of O'Brien County. This land was owned by Abraham Long. He had obtained it by Land Patent from the U.S. Government in 1859. It was part of the Louisiana Purchase of 1803.

In 1881, J.S. Finster and E.N. Finster (wife) and Horace E. Hoagland and wife, bought the SW 1/4 of the NE 1/4 and had it platted and laid out in lots, blocks, streets, and alleys. The two lots were bordered by what were named, at that time, Railroad Street and Second Avenue. The lots measured 64 feet by 142 feet. The lots were sold the same year to Hephzibah Johnston, who later sold them to J. W. Walter and his wife, Ladentia, for $400.

J. W. Walter was Hartley's first attorney and later gave up his practice to become O'Brien County Clerk of Court. He built the barn, which had a second floor, and measured 20' x 32' in 1892. It had 16' posts and granite foundation at a cost of $400. Three years later he built the house and completed it in 1896. The original drawing of the house on lot 13 showed the following:

The house has 20" posts and a basement with a granite stone foundation. The basement does not extend under the parlor and hall. As noted on a mortgage document from 1898, it was "Painted inside and out and finished up in first-class style." There were several outstanding features of the house which include parquet wood floors and a beautiful fireplace. The third-floor attic has a wooden reservoir into which water, pumped from the well, was stored. Then, gravity pressured, flowed downward to the kitchen and bathroom. It was the earliest running water system in Hartley. The wood remains in very good condition today. It has a diameter of 4 feet and is 4 feet tall and holds 375 gallons of water.

In 1898 Frank Patch bought the property for $6000 and had the mortgage released. The property taxes were $13.25 annually. In years to follow, the ownership passed to Nellie Patch Sanders, his daughter, who died in 1969. The next owners were Harry and Betty Eeten, Nellie's second cousin, who took possession in 1970. Betty live in it alone after Harry died in 1983.

After Betty's death in 2011, it was purchased at auction by the Town of Hartley with funds provided by a generous local citizen and is currently overseen by the Hartley Historical Society.