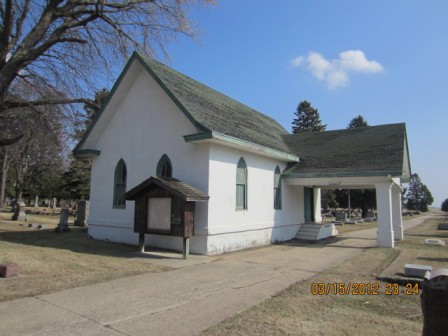 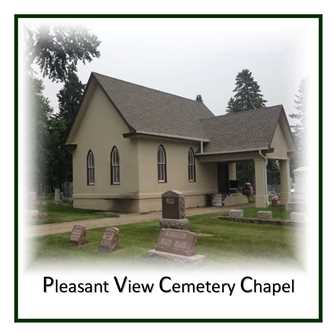 The Cemetery Chapel/Receiving Vault, as it was named when built in 1915, was constructed by the Hartley Cemetery Association. In later years, the cemetery ownership was transferred to the Town of Hartley.

The purpose of the building was to hold funerals and to provide a storage place for the deceased during the winter months until Spring, when graves could be dug by spade and shovel, and burial could take place. The basement was of ample size for most winters; however, there were several bad winters when the overflow was housed in other locations. The caskets were lowered to the basement by a hand-operated elevator.

A Hartley Sentinel story stated: "We do not believe that any cemetery in Northwest Iowa can match us in point of utility and beauty of design of a cemetery chapel. We are not informed as to the cost, but it must be a good substantial figure as the building is a good one. It is built of cement blocks with rough coat finish on the outside and steel ceiling and stucco walls on the inside."

The American Gothic-Style building's interior included an altar and pews for funeral services followed by internment.

After many years of service, the building was unoccupied as services were held at the various churches or at the funeral home. It later served as a storage building including use by the American Legion. After 97 years, the basic building has remained in relatively good condition. As it nears its 100th year, the Hartley Historical Society has added it to its list of historical buildings that need to be renovated and preserved. --Howard Borchard. 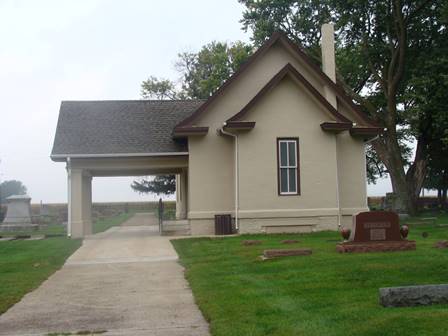 East side of  Cemetery Chapel